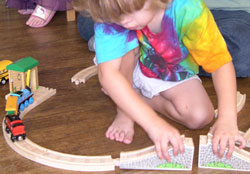 This article is credited to:
By Maureen Salamon, MyHealthNewsDaily Contributor
posted: 07 December 2010 11:39 am ET

We found this article very interesting and thought that we would share it with you.

Young children who attend large day care facilities suffer more respiratory and ear infections as toddlers than kids who spend their days at home, but develop fewer such illnesses during their grade-school years, a new study suggests.

“Overall, all the children got sick the same amount, so there are no differences between the groups — just the timing is different,” said study researcher Sylvana M. Cote, a psychologist at the University of Montreal in Quebec.

However, “one can argue that there is an advantage of not missing school days, when they’re missing major education that’s really the basis of their academic trajectory, Cote told MyHealthNewsDaily.

Cote studied data over eight years, tracking how often children suffered respiratory, ear or gastrointestinal infections during their early preschool (up to age 2½), late preschool (3½ to 4½) and early elementary school (ages 5 to 8) years.

Among the 1,238 families in the study, kids who began attending day care facilities in large settings before age 2½ had higher rates of respiratory and ear infections compared with children who were cared for at home until grade school. Cote defined large day care settings as facilities with at least 100 children.

The apparent trade-off, Cote said, was that these children developed fewer infections after age 5.

The results follow the logic that the more germs children are exposed to, the more likely they are to get sick, said Dr. Henry Bernstein, chief of general pediatrics at Cohen Children’s Medical Center of New York, who was not involved with the study.

“There’s no question when there’s an environment where kids are in close contact — and young kids may not be washing their hands as much as adults — the spread of germs happens more readily,” said Bernstein, who is also a member of the American Academy of Pediatrics’ Committee on Infectious Diseases.

Cote also found that children who enrolled in small-group child care facilities in early preschool, as opposed to facilities that had larger groups of children, didn’t have any more infections than kids who stayed at home. She added that few previous studies examined the impact of group child care on infection rates beyond the preschool years.

Kids who were initially cared for at home and later enrolled at any child care facility had more ear infections between ages 3 ½ and 4 ½, but no other differences in infection risk, according to the researchers.

The researchers did not find a link between gastrointestinal illnesses and group child care at any age.

Bernstein said gastrointestinal illnesses may not be spread as readily as respiratory or ear infections at day care facilities because parents may be more likely to quickly intervene when symptoms — such as vomiting or loose stools — appear. But runny noses or coughs may not attract parents’ attention as readily, he said, keeping sick children in day care and increasing their chances of exposing others.

Other studies have shown that repeated, mild respiratory infections at young ages — which stimulate the immune system — can prevent asthma from developing, Cote said.

“I hope people will not worry so much about sending their children to day care in relation to infections. Really, what we are seeing is a natural part of life when we get to large groups,” Cote said. “In the long run, it shows day care does not have an impact in the long-term burden of disease. I think it is (an advantage) in terms of the academic aspect.”

The study is published in the December issue of the journal Archives of Pediatrics & Adolescent Medicine.

Pass it on: Kids who attend day care facilities when they are very young may get sick less once they reach elementary-school age than those cared for at home.

This article was provided by MyHealthNewsDaily, a sister site to LiveScience.